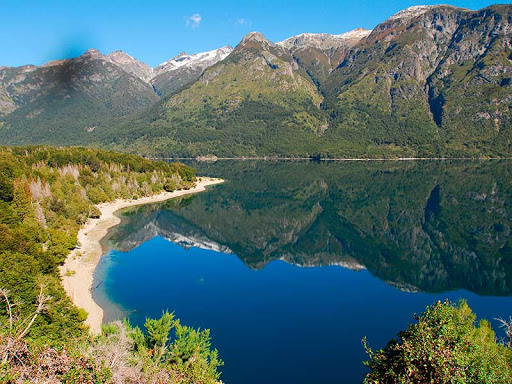 This exceptional attraction, already located on the edge of the beginning of the Valdivian Forest, is the culminating point of one of the most beautiful National Parks in the country. By Route No. 259 and No. 71. It covers an approximate area of ​​263,000 hectares. On the left bank of Lake Futalaufquen is the Park Administration, the Interpretation Center and other dependencies.

Los Alerces National Park has a varied proposal in terms of trekking paths and is one of the five National Parks that is part of the well-known Andean Footprint, where you can enjoy hiking or trekking along paths of various difficulties. In the information center you can find out about the status and availability of the trails and make the mandatory registration to enter the trails that require it.

CENTER AREA
• Cave Paintings: Starts 1 km from the Villa Futalaufquen Information Center. You visit an eaves with cave paintings. PATH WITH ACCESSIBILITY. Then you can continue with a slight ascent to the “divisadero” (viewpoint). Route: 30 minutes (one way) – 823 meters. Difficulty: Medium.
• Puerto Limonao: It begins 600 meters from the Villa Futalaufquen Information Center, there is a 4-kilometer path through the forest, bordering Lake Futalaufquen to Puerto Limonao. Route: 2 hours (one way) – 3 Km. Difficulty: Medium.
• Laguna Larga: Two kilometers from the information center, along a vehicular path, four kilometers are traveled to reach the lagoon that is outside the Park. Tour 2 hours (one way). Difficulty: Medium-Low.
• Alto el Petiso: It starts from Puerto Mermoud, on the shores of Lago Verde. You go through a forest on a snail climb until you reach the Arroyo Zanjón Hondo, you continue along the riverbed to a rib (edge) through which you ascend to the rock that leads to the summit. Total route: 7 hours (one way) – 8 km. Difficulty: High. Requires registration in the park rangers section – Arrayanes River (Before 10 am).
• Cerro Cocinero: It begins 150 meters from the Arroyo Rañinto, with a steep slope until it reaches a high valley. Route: 5 hours (one way) – 4.3 Km. Difficulty: High REQUIRES COMPULSORY REGISTRATION IN THE INFORMATION CENTER (Villa Futalaufquen) or Portada Centro. (Before 10 am)
• Irigoyen Waterfall: Six kilometers from Villa Futalaufquen, on Provincial Route No. 71. An important waterfall can be observed among a varied vegetation. Route of the first section: 10 minutes (one way) – 149 meters. Difficulty: Low.
• Krugger Lake: It begins 3 km from Puerto Limonao. It is the most complex path in the Park, since it requires having more time; Before embarking on this walk, you must consult the authorized sections and register at the Information Center. The path has steep slopes and crosses the Situation cordon through the Portezuelo (1100 m), where you can access Playa Blanca, a place to spend the night, without the possibility of making a fire. Then it continues to Lake Krügger where you can camp or sleep in the refuge. Route: 2 sections of 6 hours each (one way) – 16.5 km. Difficulty: High. REQUIRES COMPULSORY REGISTRATION IN THE INFORMATION CENTER (Villa Futalaufquen).
• Lahuán Solitario: It begins by crossing the footbridge of the Arrayanes River, then borders the Menéndez River. Before arriving at Puerto Chucao, you will be able to observe a 300-year-old Lahuán or Alerce (approx.). Route: 1 hour and 30 minutes (one way) – 5 km. Difficulty: Low.
• Lago de las Juntas: Interpretive trail with steep slopes. The path begins by crossing the Arrayanes River and continues along the Green Lake to the Ex Mermoud Population. Route: 1 hour and 30 minutes (one way) – 2 km Difficulty: Medium.
• Lago Verde: It begins 1 km from the Lago Verde section. At the end of the path you have an excellent panoramic view of the Verde, Rivadavia and Menéndez lakes. Route 1 hour (one way) -1.6 km. Difficulty: Medium.
• Old Lahuán: It begins at the Arrayanes campsite, bordering the Arrayanes River downstream – until it reaches an 800-year-old Lahuán or Alerce (approx.). Route: 2 hours (one way) 2 km. Difficulty: Low.
• Laguna Escondida: Part from the Arrayanes Section. At the beginning you will find a steep slope which will be smoother until you reach the lagoon. On the way back, you access a viewpoint, with views of Lake Menéndez and its surroundings. Route: 3 hours (one way) Difficulty: Medium. REQUIRES COMPULSORY REGISTRATION IN PARK GUARD SECTION (Río Arrayanes Section).
• Quebrada del León: 400 meters to the north by route No. 71. You can access the viewpoint of a waterfall over the stream. Tour: 1 hour. 807 meters. Difficulty: Medium.

NORTH ZONE
• Arroyo del Hacha Waterfall: It starts from the Rivadavia Section. There is a walk to a waterfall where you will find a viewpoint of Lake Rivadavia. Route: 45 minutes (one way) – 450 meters. Difficulty: Medium.